of the Wolverton Science and Art Institute and Education in Wolverton.

From the coming of the railway until the Second World War the Wolverton Science and Arts Institute was the most important social and educational centre in North Buckinghamshire. For many years it succeeded in giving mainly young men the opportunity to reach the highest echelons of industry. All the best social events were held at the Institute. 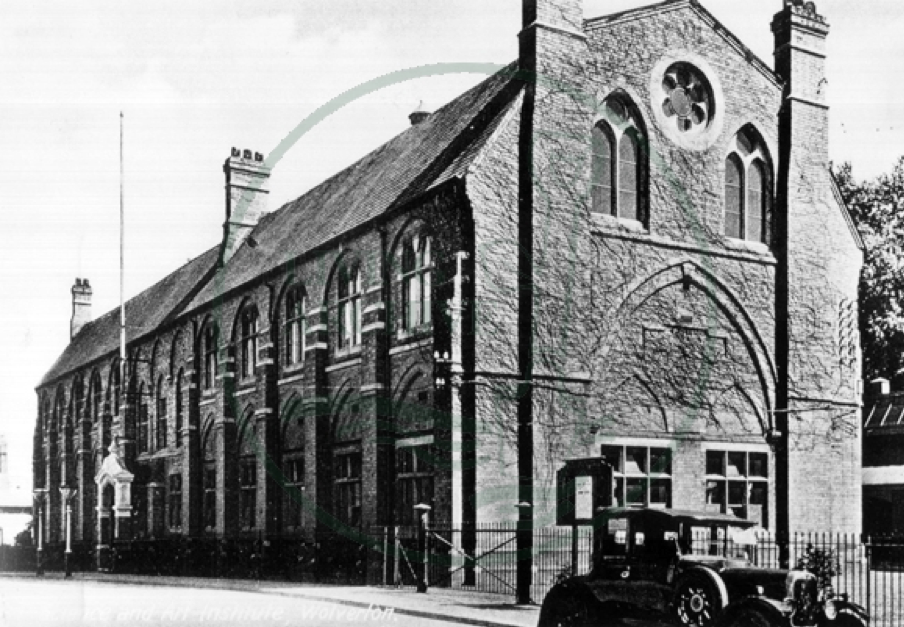 The Science and Art Institute had the distinction of being the second “mechanic’s institute” in the country The Science and Arts history ended up by being much more modest. The Mechanics Institute started in 1840 without any permanent buildings and it took until 1864 before a proper dedicated building was available; this, to provide its new name the Wolverton Science and Art Institute. The new building on the corner of Church Street and Creed Street had 12 classrooms, a library, an auditorium and a lecture theatre. Evening classes were offered in a range of academic and practical disciplines.

I’m afraid a lot of assumptions about social mobility were built into the 1944 Education Act. Grammar School pupils would fill clerical and managerial positions, boys who went to the “Tech” would fill technician roles while girls who did shorthand and typing would become office girls, and the rest who spent their last four years of schooling at the Aylesbury Street school without science laboratories and only a woodwork shop and cookery classroom in addition to their ordinary classrooms, would end up in all the other jobs. This stratified vision of education began to unravel in the 1950s when the Tech was merged with the Grammar School to create the Radcliffe School. Eventually the “Secondary Modern” disappeared before a wave of comprehensive schools.

The new arrivals in Wolverton were skilled workers and mostly literate, and having that basis in education wished to learn more. Accordingly, a group got together and founded a Mechanics’ Institute – The London and Birmingham Railway Institute for Moral and Intellectual Improvement at the Wolverton Station. The date was June 1840, barely one year after the opening of the works and it was probably the second foundation of its kind in the entire country – the first being Owens College in Manchester, for a long time now the University of Manchester.

The LBR also built a Reading Room near the canal and William Pousett, a senior clerk, was given £25 to establish a library. Later, individual benefactors gave money which expanded the library to 700 volumes. This put the two critical components in place, the organisation and a resource library of books. Men who were knowledgeable in one field volunteered their time to teach their fellows. The evening class was invented.

It was also resolve to raise funds for a building for the Mechanics’ Institute and men contributed what they could out of their savings. Eventually that day did come with a substantial commitment of funds from the LNWR and a new building opened its doors in 1864 on the corner of Church Street and Creed Street.

In this guise it continued to offer evening classes and to function as a library. Demand continued to rise in the last quarter of the 19th century and in 1890, a grant of £300 from the recently-formed Buckinghamshire County Council, enabled the institute to be enlarged. 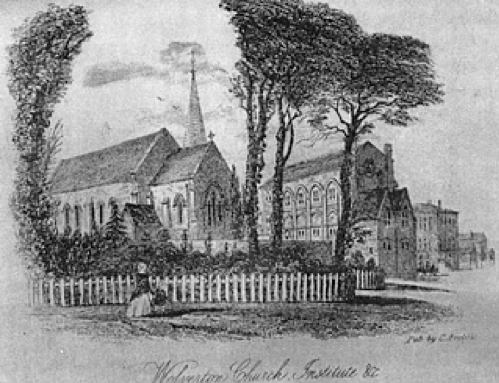 This view from Church Street of the old Science and Art Institute is one of the earliest done soon after it opened in 1864, a familiar one to those of us who remember the old building. It was by no means such an impressive structure when it was first opened in 1864. The early lithograph below illustrates the building as it appeared in the 1860s from Creed Street. It was about half the size of the later building.

In 1908 the Wolverton County School began its life here before the new building opened at the top of Moon Street in 1909. In that year the Science and Art Institute got its first paid Principal – a part time employee. 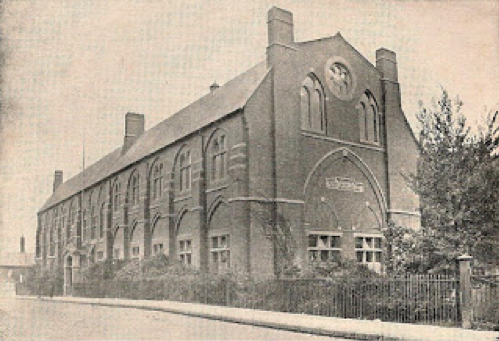 The evening institute was increasingly successful and many young men and women were educated there. The school leaving age in those days was 13 and most young people left school for work with only a rudimentary education.

Change and improvement continued over the years. After the 1944 Education Act the day school was free of tuition fees and admission was by examination at 13. Pupils normally continued to 16 and took subjects in the new General Certificate of Education. Formal qualifications through part-time study were ow available through the Royal society of Arts and through Ordinary National Certificate and Higher National Certificate.

The term “Further education” entered the lexicon and in 1954 the Wolverton Science and Art Institute was re-named Wolverton College of Further Education.

The days of the ”Tech” were now numbered. The educational authorities started negotiations to bring the Wolverton Grammar School and the Tech together in a single institution, and in 1958 this was formalised as a single school – The Radcliffe School. The Wolverton College of Further Education now concentrated on day-release classes and evening classes with a strong vocational focus, returning in some respects to its 19th century roots.

The new college opened on a field site on the Stratford Road, (Innocently, as archaeologists later discovered, destroying the remains of a bronze age settlement on the site.) These buildings were in use for about 30 years and then demolished to make way for a housing development.

In the meantime the old Science and Art Institute slipped into partial use, to occasional use and then disuse. In its state of disuse it became vulnerable and one night in 1970 someone started a fire, which quickly engulfed the building

This is what it looked like the following day.

The Council quickly demolished the building without trying to reclaim it.

The proceeds from the sale of the land were invested in trust to the Wolverton Science and Art Institute Trust. It is interest from these investments that is used to make annual awards. 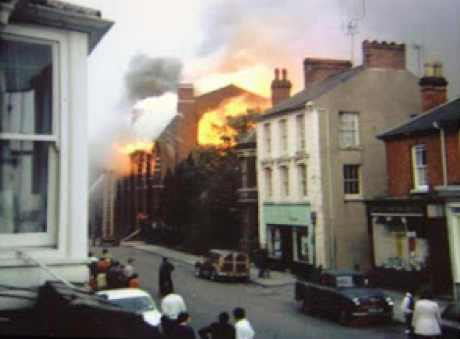 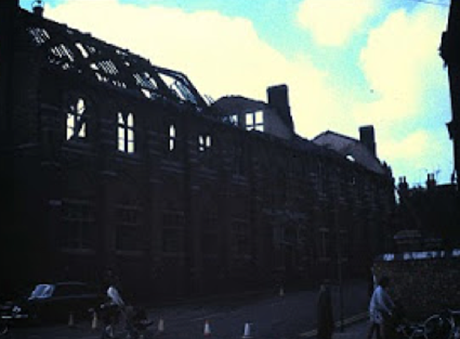